How I raised my Orphaned Foal – by Katarina Antens Miller

Four weeks before little Iggy Pop was born, her mother was diagnosed with founder and my vet gave me a very pessimistic outlook about her survival.  This was devastating news to me, the thought of losing my wonderful and beautiful mare that came into my life at the age of 2 and the baby she was carrying was very depressing. The next couple of weeks were stressful but thanks to the care and diligent efforts by my vet and blacksmith my mare made it through the delivery.  On April 10th, 2018 little Iggy Pop entered the world, a strong, healthy and beautiful SWB filly by H.Vortex, under LA Baltic Morningstar by LA Baltic Sunrise. 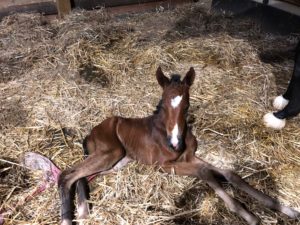 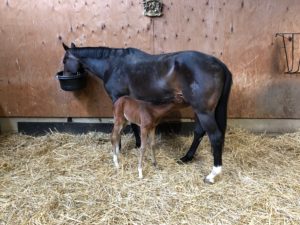 My mare was able to cling on to life for two very important weeks.  During this period Iggy was able to stabilize and stand to nurse, and most importantly, ingest the colostrum, the first form of milk produced by the mare, rich in antibodies and critically important for immune protection of the newborn foal .  Also, it gave me a little time to search for a surrogate mom or babysitter.

Finding a nurse mare turned out to be a hard task and besides, I was very conflicted about it for many reasons.  First off, there are only a few places around that have nurse mares available, and the timing is crucial to get a mare that just “lost her own” to introduce to your foal. Unfortunately, my timing was bad. Additionally, there are no guarantees that the nurse mare accepts your foal, and if not, could potentially reject and hurt the foal.  But more importantly and fundamentally, it just felt wrong to lease/use a nurse mare that has to abandon her own foal for the benefit of yours! So that route was a dead end.

I was running out of time and started the get a little desperate.  My vet wanted me to match her up with an older horse stabled at my farm but that really made me nervous. She was such a little thing and even though the older horse in question is a kind soul, still one bad kick and she could be seriously hurt.  But as the saying goes “desperate times call for desperate measures”  I started to look for unconventional solutions instead, one of which was to get a goat.  Goat and horses for some strange reason get on very well together.  Not only as companions but as a matter of fact, even the goat’s milk is similar to mare’s milk, and probably more so than milk from other species. Foals generally accept goat’s milk more readily than milk replacer.

So next big question, where do I find a goat?  Not knowing anything about goats, I started calling around to different goat farms to see if I could buy one.  The cost for a Nubian type goat seemed to be around $400 so that wasn’t so bad.  But no luck, all the places I contacted were out of goats for sale, they had either just sold one or they were back into a breeding program.  Just as I thought I was out of options, I got a call from a friend, she had contacted some of her racehorse buddies and guess what?…..they actually had an experience babysitter goat they would lend me!

The sad day arrived, my mare went to “greener pastures” and my foal was put in a stall next to her half-brother Ziggy Stardust(by Adriano).  Shocked and devasted, little Iggy was calling for her mother and constantly pacing. We didn’t have the goat yet, so we had to keep her company in the stall to keep her somewhat calm. 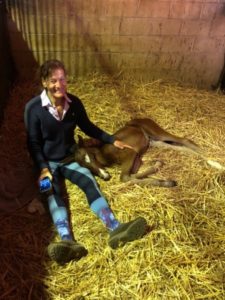 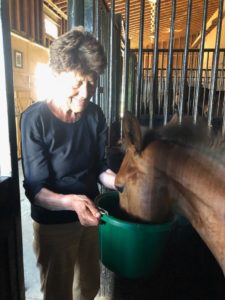 I had done research about milk replacers and how to best feed her.  I learned that a two weeks old foal drinks 18 pints of milk per day!  Just the thought of having to bottle feed Iggy 10-18 times per day was exhausting.  I had heard that the FoalLac was a good product….and it was also available to be ordered on Amazon!!! I had a bunch of different bottles and nipples to test on her; cow, lamb and human nipples.              First day of her orphaned life, I mixed the powder with warm water and tried the bottle feed her with the cow nipple.  Iggy was completely uninterested, and after several attempts with the different nipples, I ended up calling the vet to have her come and tube her and force feed the milk so that she would stay strong and healthy.

The next couple of days were critical to get her to drink milk.  I found out from people with  experience raising orphaned foals that the best and most efficient way was to feed the milk out of a bucket.  So the next morning, I mixed the milk again but this time in a bucket.  I dipped her nose into the lukewarm milk, she just stood there, not sure what to do, followed by blowing some bubbles in the milk and then….finally she started to suck the milk!!.  She drank at least half the bucket, I texted everybody about the news! We were all super relieved. 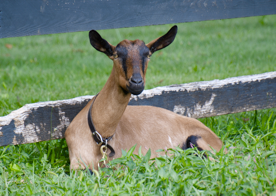 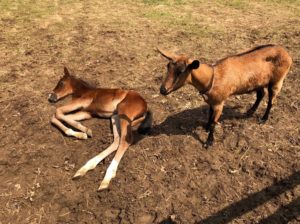 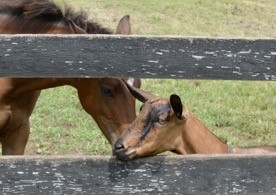 The next Step was to introduce the goat.  Iggy was still pacing, sad and lonely so I was very hopeful that the goat could fill some of the void and give her some comfort.

The goat was great, she carefully approached Iggy that clearly turned her back to the different species she represented. The goat stayed in her stall and was out with her in the same field.  Slowly but surely they got closer and developed a great bond.  Iggy was a ferocious eater and would nicker very excitedly every time she saw the green bucket with her milk.  Slowly I could introduce some FoalLac pellets and also a little bit of grain.  It was a little bit of hassle to feed both of them in the same stall.  One thing I learned was that the goat was not allowed to eat horse feed and instead I had to get her special food and feed her separately to ensure she didn’t nibble on Iggy’s food.

The goat has kept Iggy company and been a great friend and nurturer. Iggy has developed very well so far, among other things, evidenced by her inspection results given by the Swedish judges back in September of this year.  Not only did they think she was very well developed and healthy for being an orphan, they thought she was a noble, light footed premium foal!!!

As she weaned off the milk and turned 7 months old, it was time to find a horse partner! Even though she was very fond of her goat friend it was clear she needed to socialize and be with other horses.  Horses teach each other to interact and respect each other in a natural way which makes it easier for us humans down the road when we are interacting, socializing and training the young horses.

Fortunately, Iggy’s half-brother Veuve Clicquot (by H.Vortex) was recently weaned from his mother and could come stay with us. We introduced the two with the goat in the mix to act as a referee.  At first she actually threatened the colt as he tried to approach Iggy but backed off when she realized he wasn’t going to hurt her.  The next day, I returned the goat to her home and now Iggy and her half-brother Veuve are best friends and live together. 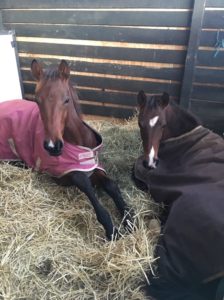 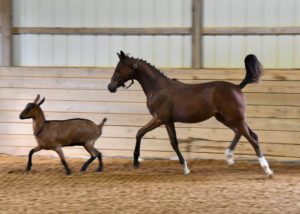 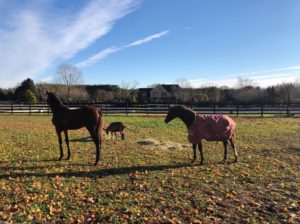